FRP Products Co. Pte. Ltd. is the in-house contractor for refinery in Singapore. Their client specified the use of TSA for the rehabilitation of pipes in their refinery. FRP was keen to explore the possibility of using the SATBlast Vapour Blasting machine with Abrablast Recycled Glass abrasive to benefit from the cost efficiency and improved productivity.

Abrablast (Recycled Glass) Abrasive is a versatile blasting media. In Medium grade it is an all round abrasive suitable for use on a wide variety of substrates. In Fine grade it is ideal for use in our SATBlast vapour blasting system.

The SATBlast machine along with the Abrablast abrasive allowed for ease of blasting and provided an adequate surface for various coatings. Another salt-test was performed post-blasting and it was found that the salt content had reduced! Furthermore, a profile test was run and it was revealed that the surface achieved between Rz 92 – 102 microns (higher than the minimum requirement of Rz 70 microns).

Next, the plate was coated with a TSA (Thermal Spray Aluminium) with an average of 300 microns DFT. Thereafter, a Pull-off Test was administered via various Dolly’s onto the coated plate to test the adhesion of the coating to the substrate. The results depicted a range between 8.75 MPA – 11.57 MPA when the minimum requirement is 7.00 MPA. 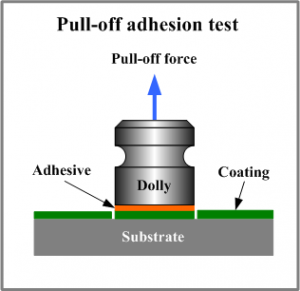 Click Here to Meet The Team
Scroll to top